“Going the Extra Mile: The little things that can make a BIG difference in your YouTube ads”

Have you ever seen those annoying short videos right before you see the actual video you wanted to see? These are called skippable in-stream ads (formerly called TrueView ads). These ads now show before, during, or after each YouTube video. 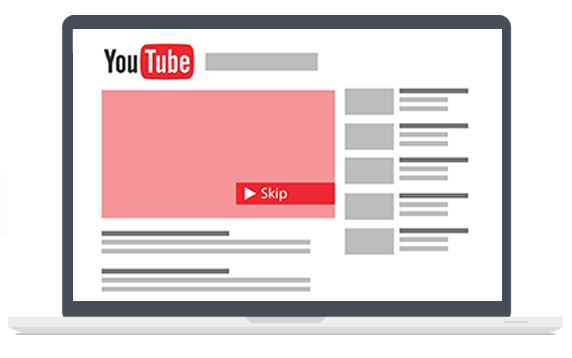 As an advertiser, you only get charged if the user watches at least 30 seconds of your video (or the entire video if it’s shorter than 30 secs) or if someone engages with your ad (clicks a link, a banner or a video card). You can set any budget you want but YouTube recommends at least $10/day. In addition, you can set your max CPV (the most you are willing to pay per view).

If they click on skip (as most of us do, you won’t get charged) and you will get to increase brand awareness to a prospective buyer for free!

When it comes to advertising on the internet, there is no better choice than Youtube. The reasons for this are not just at first glance given by Google; they are deep-seated in their philosophy of YouTube and its users. Not only does YouTube offer insight into user behavior with detailed statistics, but also it has a way to get to the user in a way that is not possible with other media. This is because the entire platform has been built around users and how they use it. YouTube is owned by Google, which means all advertising on the site can be linked to a wide variety of Google services, such as Adsense.

YouTube is still considered the 2nd largest search engine. Why? Because users go to YouTube to search for videos of a particular product or service or even how to do something.

Advertising on YouTube allows you to get in front of these people similar to having a paid search ad.

Another benefit to advertising on YouTube is cost. In most cases CPV (Cost Per View) is much cheaper than a typical click from your standard search campaign. It’s a great channel to raise awareness of your brand and if you manage it right, you can use it drive website traffic and increase your conversions.

YouTube ads are becoming more and more popular, but many people struggle to create a good advertising campaign. This is where youtube mockups come in! A youtube mockup is a visual representation of what your video will look like on Youtube after you upload it. In this article we discuss how to make the perfect youtube ad mockups with Photoshop, tips for making your own YouTube ad mockups, examples of successful and unsuccessful YouTube ads with screenshots so that you can learn from them!

YouTube ads are becoming more and more popular, but many people struggle to create a good advertising campaign. This is where youtube mockups come in! A youtube mockup is a visual representation of what your video will look like on Youtube after you upload it. In this article we discuss how to make the perfect youtube ad mockups with Photoshop, tips for making your own YouTube ad mockups, examples of successful and unsuccessful YouTube ads with screenshots so that you can learn from them!

A Youtube Ad mockup is a visual representation of what your video will look like on Youtube after you upload it. Many advertisers struggle to explain the content and components of a Youtube Ad to their clients. Instead, they could be collaborating together to create an impactful and compelling Youtube advertising campaign. The biggest obstacle is the lack of visual presentation and getting involved with the creation of the Ad itself. Clients will often worry, how their ads care being created, what designs are being used, how they will be able to check the design before it goes live. Youtube mockups solve that problem and are becoming more popular every day.

YouTube mockups are becoming more and more popular, but why? Not only do they allow you to show your clients what the video will look like on Youtube after it has been uploaded. But youtube video mockup also allows you to showcase certain components in a visually appealing manner that helps people understand what’s happening in each frame of the ad. It is much easier for designers or non-designers to create an Ad with this process because it demonstrates how everything will interact together beforehand. This way there can be no confusion about whether things line up correctly or if the headlines or descriptions fit. The main reason behind using youtube mockups is to bring clarity to what the Youtube Ad looks like in the wild by all parties before it launches.

How To Create A Perfect YouTube Mockup With Photoshop

Creating a youtube ad mockup is easy! First, you need to film your video on Youtube. Then upload it and go into the edit section of that particular video. Find the design tab along the top right-hand side of this page. Click on “customize thumbnail” and add in any text or images that you want to be featured before uploading your Ad to Youtube!

There is various Youtube Ad Mockup templates made in PSD format (Adobe Photoshop) If you know how to use photoshop this might be a good way to get started, the template will have preset designs which you can replace with your own, then you can show your client and get feedback faster to make sure you are designing the ad appropriately based on the brand and target audience.

Final thoughts on how to make the perfect youtube ad mockups:

The perfect youtube ad mockup should be clear, concise and as simple as possible to convey the primary messages that you want your customers or clients to take away. Keep in mind how long the consumer is going to watch the video, if it’s too much information then they might not stick around and could miss out on a great offer!

Co-Founder of PPC Ad Editor I am a leader in digital marketing, specializing in strategic planning, implementation, and optimization.